I began my base training for the Chicago Marathon on April 9th with an easy 2 mile run around my neighborhood. This morning I completed my training by running the

same 2 mile loop. I have run 548.8 total miles over 6 months. I have completed two 5K’s, a 10K, and a half marathon race. I’ve run in large groups and alone, on hills and flat ground, in all kinds of weather. I completed 101 of my 102 scheduled runs, And now all that is left is the marathon itself.

But I had a much more important goal than completing 548 miles of training runs. I am running to raise money to help World Vision provide clean water to African communities. My initial goal was to raise $1500, enough to provide clean water for life for 30 people. It was an ambitious goal, especially for a guy who is not comfortable asking people for money. But my family and friends stepped up almost immediately, and I realized I would have $1500 raised in no time. So I upped the goal to $2600, water for 2 people for each mile I will run in Chicago.

But $2600 proved to be no challenge for the awesome people God has put in my life. Over time I raised my goal to $3000, then $5000, and finally $7500 – clean water for life for 150 people! Last night as I was about to go to bed I heard my phone alert me to a message. The message was from Josh, Team World Vision’s Chicago Area Director. “You did it! You hit your goal!” On the second to last day of a grueling training schedule, it was incredibly great to hear.

Yet, Josh was wrong. Not about the $7570 that has been raised, but about who did it. It was not me. I simply put the need out there and kicked in the first $150. That was easy. The day I first posted about the marathon on Facebook, 4 months before I even began training, the first donation came in from a good friend and co-worker. And 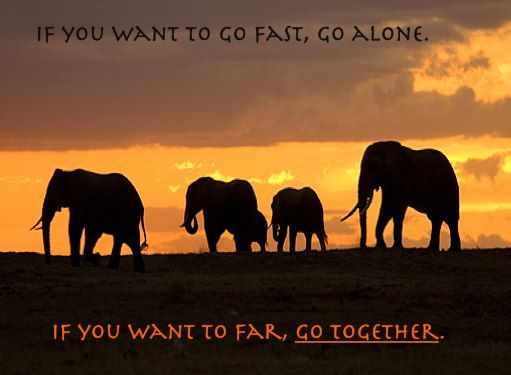 they kept coming. More co-workers, family members, church friends. Friends I have known for 50 years and people I barely know at all. People who can afford to give, and people who cannot. Small gifts, large gifts, and everything in between. It was amazing. And humbling.

I am grateful to God for the amazing people He has but in my life. I am thankful for each donation, large or small. Team World Vision’s motto “Go Farther Together” comes from an African proverb that says “if you want to go fast, go alone. If you want to go far, go together.” We have gone far, and we have done it together. Thank you!

2 thoughts on “Go Farther Together”